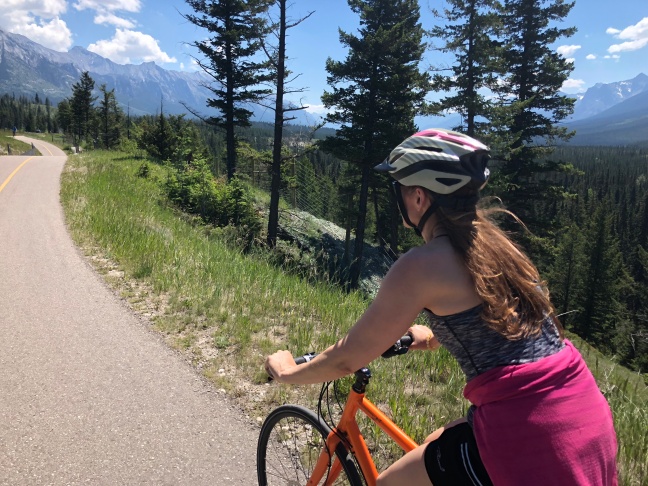 One of the many benefits I enjoyed from my yoga practice was the ability to move energy: to shift emotions. Often during my time on my mat, repressed feelings would arise and accompany me in my practice. Anger would release, tears would fall and anxiety would escape.

January will be 3 years since I’ve practiced yoga on the mat. My cervical spine no longer approves of yoga class. But in an effort to help my husband stay mentally and physically lighter during winter, I signed us both up for Saturday morning spin class at the local YMCA.

We’ve been spinning our Saturday mornings away since mid-November. But yesterday was different.

Near the end of our class, the instructor chose an odd song.

“Think of someone who can’t be here today. Someone who would love to be in this class … on that bike … but can’t. As this song builds, increase your speed. Do it for them. If your mind tells you you’re tired, think of them.”

The instructor turned off the lights in the studio as The Sound of Silence reverberated through the room. I was never a fan of that song, mainly because as a member of our elementary school choir, I had to sing it over and over and over. Depressing song.

The little girl who left too soon because of cancer.

A friend of a friend, with her own cancer challenge.

Even Terry Fox came. Perhaps because he was the most persevering person I could invoke.

The room quickly filled with those unseen. My chest squeezed hard. Tears began to stream down my cheeks as I struggled to breathe.

I pedalled faster, inviting healing through my back heart, wanting the grief to transform.

Those who filled the room shone bright, no longer in pain. It was only I who held the grief: mine, theirs, our collective grief?

Suddenly, I stopped wanting it to transform.

And I sat with the pressure, the struggle to breathe and the immense sadness.

I pedalled as I sat on my bike.

Grief pedalled alongside me.

The song ended and the instructor turned on the lights.

I wiped the tears from my eyes, pretending they were sweat.

If you are interested in discovering more about healing, grief and the heart, visit Heart Chakra online course.